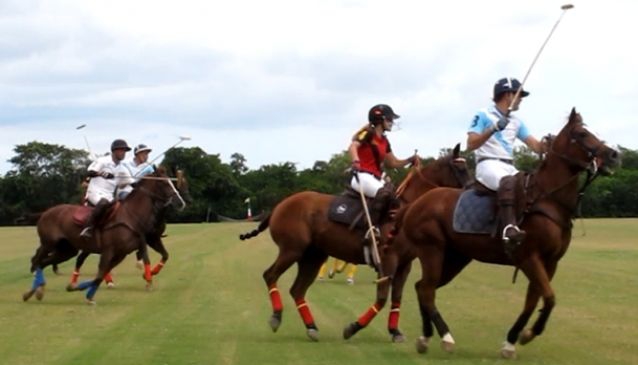 The Yucatan Polo Club was founded in 2006 by a European couple just moving to Merida. They had just started playing polo, and decided, since there was no polo in Merida, to start a polo club.

• A double-size sand arena, measuring 120 meters by 80 meters, with a viewing platform for 25 spectators

• A wooden horse for practicing the various polo shots

The Yucatan Polo Club is located just off the highway connecting Merida to the port city of Progreso.

From the northern Periferico (Merida's ring road), it takes about 9 minutes to the Club, and from the Club, about 15 minutes to the Gulf of Mexico. The official address is km4 carretera Komchen-Kikteil, but there are no markers, Just follow the map, and about 4 km after leaving the main highway, you will come to the entrance of the Yucatan Polo Club - you can't miss it!

The club season runs from September 1 until June 30. During the week, the players come out to practice, and every weekend, there are club games. Visitors are invited, and there is no entry fee. All of the Saturday games start 90 minutes before sunset. The Sunday games start 90 minutes before sunset from September until the beginning of November, and from March until the end of June. From November until March, Sunday games are at 11 AM (when in doubt, call the contact number).

The Club has a riding school (Troya) where visitors and students can rent horses, and take classes with experienced teachers for basic riding, polo riding, hitting, polo strategy, culminating in practice games in the sand arena. Once a player has shown his/her proficiency in the sand arena, they have the opportunity to move up to the grass field.

IIn addition to the club games, we host 2-3 major tournaments a year - including the Yucatan Open and the Hennessy Cup, this year in their 8th and 7th editions, respectively.

The tournaments typically have 1500 spectators over the weekend, and feature, besides polo, a horse jumping event with riders from 7 Mexican states (for March tournament) , 4-10 restaurants featuring Mexican, Thai, German, Irish, Nouvelle Cuisine, and much much more. In addition, the Club hosts tournaments for charitable events, such as AIDS support and Breast Cancer.